Looking for a Math Program Organized Like All About Spelling

We’ve been using Math U See, and while I love the manipulatives, and adored how it taught place value, since then I’ve just had a hard time following it. I take too long trying to memorize the lessons to present them myself, and my son doesn’t really follow the videos well (it just works better when I’m teaching it).

Meanwhile, we’ve have a lot of success with All About Spelling and it’s SO easy. It tells you what to say, then has a exercise to practice that, and breaks everything into very small parts (like each lesson has several sections…very easy to follow).

UPDATE
A lot of people weren’t understanding why I wasn’t getting what I wanted from Math U See.
To clarify, I want something where the lessons are laid out like this… 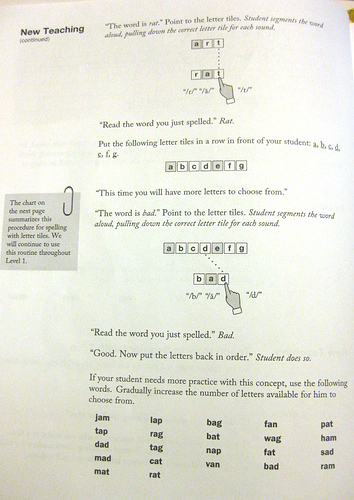 That’s the middle of an All About Spelling lesson. See how it tells you exactly what to say and exactly what to have your child do in short easy to follow sentences with illustrations. If I posted the whole lesson you would see that any extra info (like why this works, or alternative ideas if your child struggles, or background info) is separate from the lesson ( in a sidebar or header paragraph) so that when you are following the lesson you can just read line by line.

HERE’S WHAT I DON’T WANT
In Math U See all the extra info is mixed in with instructions on how to teach the lesson. To convert that I’d have to (and have) rewritten it as an outline, or just memorized it. I’d rather just open it up, skim it, and then read the lesson line by line to my child. I have no problems with the methods of Math U See. It’s just that the program doesn’t outline it’s lessons in a simple, easy to follow way the same way All About Spelling does.

Here’s an example of how a Math U See chapter looks…see the difference? 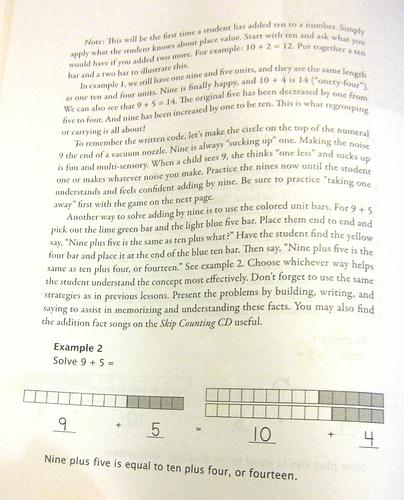 I would love to find a math program laid out more like All About Spelling. Any suggestions?

I don’t have any suggestions about other programs but what level is your son at? I have one in Primer, Gamma and Delta. I just watch the video along with them and then review any topics they don’t understand and work through a few of they need help understanding the concept. I don’t do ANYTHING in advance to prepare for their lessons.

I do the same thing Lindsay does, except for the younger kids. I don’t really need to watch the videos anymore for the early grades, but I do watch them along with my older ones just so I know what they’re doing! We watch videos on Mondays, then I help them go through the worksheets. I usually only have to help on Mondays and Tuesdays depending, then the rest of the week they do pretty well on their own and I just assist when needed. I don’t prepare in advance at all for that which is why I love it!

He’s in Primer. We tried watching the videos but he didn’t seem to absorb any of it, unlike when I did the lesson myself. Do you watch the whole video for each section? We watched the part of the video where they explain the different number words and how they are “silly” and even though it was fun I had to keep directing his attention back to the video and then afterwards repeated nearly all of it cause he didn’t get it. The part before about the number street story I memorized and elaborated with a little more fictional aspects and he just got that really well. He did well with the games they suggested for memorizing the color blocks too. Once we got to adding I didn’t try the videos, just tried to do what he said and that’s when I got way-layed. We ended up just doing rote memorization while jumping on the bed (something we had tried once before starting with a normal math program, he’s now memorized nearly all of them.

How old is he? Maybe the topics are a little advanced? My little boy has done really well with the blocks. Those have seemed to be what makes things click for him.

He is 7, turning 8 in April. He repeated Kindergarten at home last year
after a year at public school where he was miserable and learned very
little. We are doing 1st grade material this year.

Have you looked into Right Start Math? It’s similar to MUS with different manipulatives/hands on material. Also, My sister in law switched from Math U See to Life of Fred. I know its not meant to be a complete math curriculum but kids LOVE it and her struggling learner has so much fun and learns so much but most importantly he grew a love for learning math from LOF.

We read a chapter each morning from LOF for our morning group work and my kids love it too.

Do you have the teacher’s manual for MUS? It gives you the step by step of the lessons so you wouldn’t have to memorize if your child isn’t into the videos. They also have a lot of great helps on their website, or if you called they’d probably give you pointers of how to make it work better for you so you don’t have to buy something new this year.

For math fact memorization, go to YouTube. There are tons of creative teachers out there who have catchy math fact songs. We supplement MUS with math fact videos for my daughter who has attention issues, she loves the videos and she memorizes song lyrics easily, so that has helped us inject some extra fun as well.

Yes, I do have the teachers manual and I don’t see how anyone could open it up and teach straight out of it without putting it into their own words and sort of practicing how to teach it in their heads. it’s not really step by step broken up in little bits that you can just open up and do with a child the same way that All About Spelling Is. I think I just need to post some pictures to show the difference.

Here’s All About Spelling. See how it’s broken into itty bitty chunks and tells you exactly what to do in the lesson? 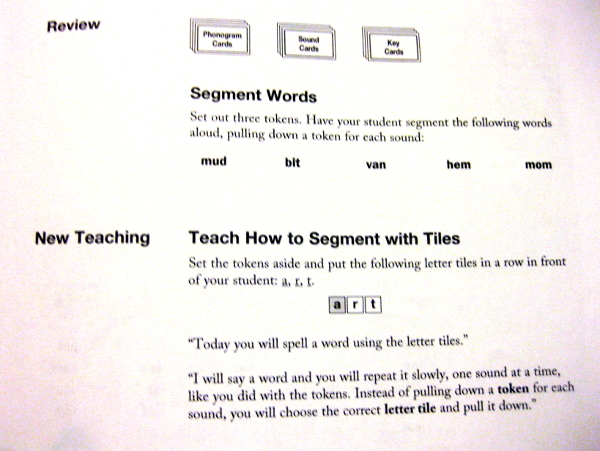 Now here’s Math U See…see the large paragraph of Text…I don’t want to be reading that WHILE I do the lesson. I have to read it first and then re-write a little step by step guide if I want it broken into “do this, then do this.”

Pull out a ten bar.

Ask child,
“What would you have if you added two more?”

Put together a ten and a two bar

<Illustration of 10 and 2 bar put together>

See the difference? I want my math curriculum to tell me exactly what to say, and exactly what to have my child do. I want it broken up step by step where each step is on a separate line. I want it extremely simple. I realize Math U See sometimes tries to explain the why, and that’s good…but in what I’m looking for that would be separated from the step by step lesson…maybe in a sidebar paragraph).

This year I used BJU math and the teachers manual tells you what to say. i made some small changes but other than that it was pretty open and go. It’s pricey but we’ve loved it

We use RighStart math and the lessons are scripted and laid out with examples. You can see some samples from their website to see if it is what you are looking for.

We use right start math and love it. Very little worksheet, hands on, and fun. It is scripted and easy to teach. Only prep I have is gathering the manipulatives ahead of the lesson so we’re prepared. 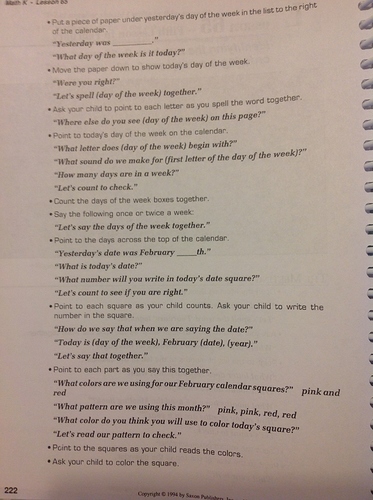 I love AAS and AAR for your exact reasons. I want to be told what to say and when to say it. The first math program we started was Saxon. I have only used the Kindergarten book, but it does exactly what you are looking for. We switched to MUS the next year and is a better fit for our family. I have heard great things about Saxon though. Maybe worth a try to look into.

I just purchased “Addition Facts That Stick” by Kate Snow. It is only for teaching addition facts, but it looks like the format that you’re seeking. 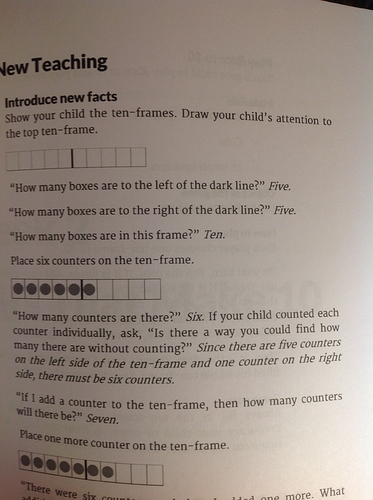 We use Christian Light Publications for our Math and it is laid out similar to your example above. The teacher’s manual will tell you what to say. You can go to their website and they have samples of each of the books. We started with MUS a few years ago and it did not work for either of my kids. They have done extremely well on this curriculum. Good luck!

I realize this is an old post, but I wanted to ditto CLE (Christian Light Education) and their math light units. you can see a sample of the grade 1 TEACHER MANUAL here:CLU MATH GRADE 1

We love math u see, but have used it as a supplement for our younger two because they just thrive with the CLE tye of curriculum (my oldest still uses MUS exclusively, because it works for her.) Personally, being a math-science nerd, I truely believe in supplementing math curricula with other programs, living books, puzzles, games and hand-on activities. It is more work, but we use our “Fun Fridays” to add these on. Once a week adds up to between 30 and 40 supplemental math lessons each year–which achieves a lot!

Blessings on your search!