How do you know what's "normal" for spelling mistakes?

My 5th grader has always struggled with spelling. She was in public school until this year and we started homeschooling. She is a great reader but not great at spelling. We have been using Spelling You See Wild Tales because I felt like she needed remedial work and her and my 3rd grader can do it together. I’m not sure if I am seeing the progress I want to see. How do I gauge something like this? Bless her, here is her page from this week. I’m not worried about words like macaroon, it’s the others. 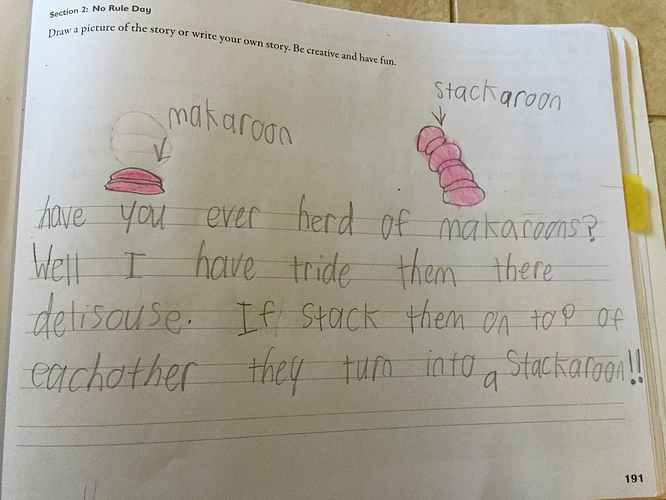 Were the kids in her public school encouraged to just write - using spelling that sounded like the words they wanted to use? Many schools seem to like “invented” spelling" which is great for rough drafts, but it seems, from what I have seen, they never get beyond that stage to a final correctly spelled paper.
Maybe, picking a writing she does and polishing it, especially the spelling, will get her into spelling more correctly each time she writes. I do like what you shared of her writing.

I believe that is part of the “invented spelling” idea . . . and I know HUH!!!
Hopefully, by polishing a writing every so often, she can get beyond that.

I used to be involved in the public schools as a substitute teacher. My major was Shakespeare and English Grammar so these ideas rapidly just drove me out of public school teaching.

The ability to read the nonsense words actually makes sense when you understand the reasoning behind it. Multi-syllable words often have syllables that make up “nonsense” words but need to be read. Teaching kids to read them is the precursor to this.

For spelling you might want to look into supplementing with something like All About Spelling, which teaches the rules about why words are spelled the way they are. I think using both approaches to spelling probably produces the best results overall.

Hi! I probably have some really weird advice, and maybe it really won’t work for anyone but me… but here is my experience with spelling…

When I was growing up I was a TERRIBLE speller. I mean TERRIBLE. I was great at memorizing things - and so for the spelling tests I would memorize the words for the test, and then forget them when we went on to the next list the next week. And I really really didn’t care. I didn’t care clear through middle school. When I finally reached high school I started to care, because I wanted to be a writer. Only when I finally cared about spelling did my spelling actually start to improve.

So, knowing that about myself, it really doesn’t bother me when my kids spell things wrong. On assignments we just go over the words and the correct spellings. I usually make them write the words correctly, but I really don’t make a big deal about it. I just tell them, OK, look at the word, see how it looks? Try and remember how it looks, and that’ll make it easier for you to remember how to spell it.

So, you could, (if you decide to)… show her the correct way to spell some of the words she spelled wrong. Have her practice writing them the correct way. As far as normal? I think all kids are different. Some of them pick up spelling pretty quickly (like my oldest son) and some of them struggle (like my older daughter), so just keep giving gentle correction. I think eventually they will care about enough about spelling to figure it out.

Very awesome and imaginative story by the way.

She is SO creative and SO right brained, I think that is why she struggles with math and spelling. Luckily we have found Math U See and that has helped so much in math. I really think I am going to start her on All About Spelling. I already have the books for when my 5 year old is ready.
I love her creativity and I don’t every want to squelch that!

I don’t have anything better to add because everyone else gave such great ideas! I did want to chime in and compliment your daughter on her brilliant play on words, though. The “stackaroon” gave me a chuckle!

I would encourage you to try all about spelling. To be honest it doesn’t help my daughter spell so much as help me correct her spelling. The rule cards give us common ground for how to talk about words using “ed” to show past tense and different ways to spell the same sounds.

It seems familiar to me. I have a 4th grader who also struggles with spelling. We are trying Words Their Way and I have seen progress. All About Spelling is a great program, but my son struggles with memorizing rules. Words Their Way is more about spelling patterns than rules. Here is some information in case that you are interested. 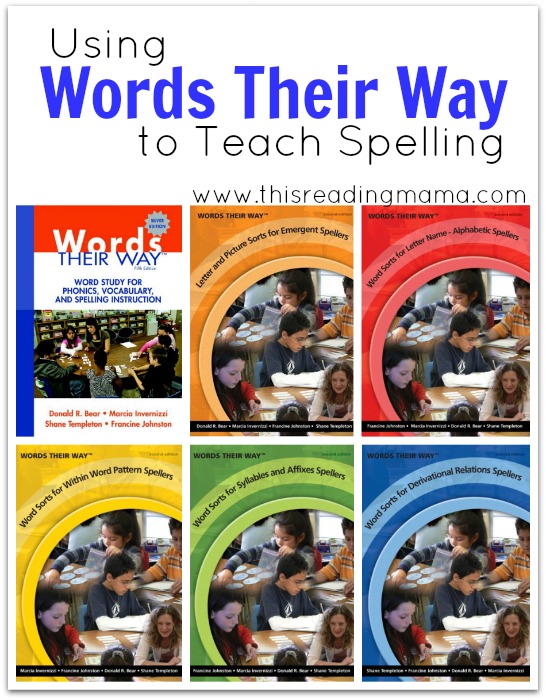 *This post contains affiliate links. I was given the newest versions of these books by Words Their Way, but have used their products for over ten years to teach spelling. All opinions expressed are my own. I am often asked by readers which level of...

"Word study" is an alternative to traditional spelling instruction. It is based on learning word patterns rather than memorizing unconnected words. This article describes the word study approach.

Just wanted to add another vote for All About Spelling–it helped my kids so much! And…LOVE the “stackaroon!” That’s hilarious! She is so creative!

Thanks, we are starting All About Spelling Monday!

I agree w/ the All About Spelling! My oldest is first grade; and teaching her phonetically to read/spell in kindergarten really helped and excelled her reading. Then we started All About Spelling this year to then work on her spelling and it has done wonders. Don’t forget to start w/ level 1 - it will help teach some of the basic spelling rules, you might fly through it but it will def hit things she may have missed or just doesn’t understand why we spell the way we do. I know I’ve learned a ton!